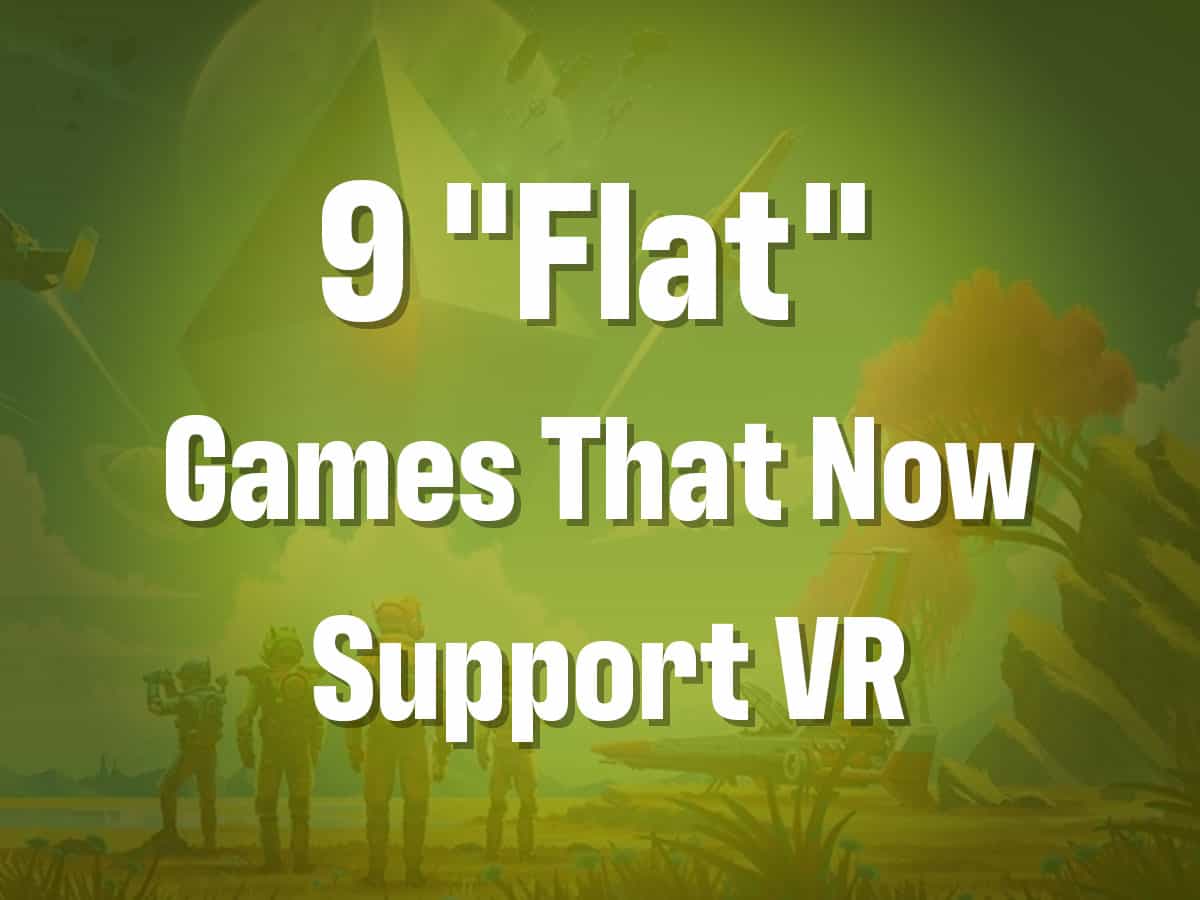 Hey! We were talking about how some "flat" games just seemed made for VR. That got the ball rolling, and we decided to come up with a list of the most popular games that started out flat but later added VR through an update, mod, or a VR specific release. We tried to order the list by the level of VR support and gameplay. Enjoy!

Also, as many sims incorporate VR we will be leaving them off this list.

Get it on SteamGet the mod on GitHub

Perhaps not fair to put this on the list since VR support was never official (coming only with a hidden DK2 mode) however, the awesome modding community has blessed us with the ability to play it in modern headsets.

At the time of release, it was something to behold particularly since most VR titles were often more short tech demo than a game. However, comparing this game to modern titles with native motion controllers and physicalized objects, it’s VR gameplay has become dated.

This is the only 3rd person VR game on the list. Being able to play AAA games in VR is always a treat. But, this is a pretty simple port to VR, if done well, which basically just lets you see everything in 3D, with head tracking, considering this is included with the flat game, it's a safe one to check out both ways.

This game runs great in VR, but lacks motion controls. So while you get the beauty of the underwater vistas in motion tracked 3D, it lacks the presence that games built from the ground up for VR offer.

I’ve grouped Skyrim VR and Fallout VR together, because they are so similar (as far as VR integration is concerned) First thing to note it these games are separate purchases from the original game. So even if you own Fallout 4, you’ll still have to purchase Fallout 4 VR. Though this is a bit frustrating it makes some sense, as these titles had to be significantly reworked to get them into VR.

Unfortunately Bethesda’s games have always been plagued with bugs, and adding VR to the mix seems to have only compounded their issues. Thankfully the modding community has put a lot of work in to fix the issues that plague these games, but this hassle really holds them back.

A game based on the poor control you have over your in game doctor’s arm seems both a strange and obvious choice to move to VR. Though still quite clumsy when using the motion controllers in VR, you are significantly more coordinated than you likely ever would be trying to use a mouse. I think this game’s gameplay is most impacted by its entrance in VR.

This is nearly a sim, so it's a bit of a cheat to be on this list, but you can’t really fly spaceships, so it sneaks in. Since Elite Dangerous always has you looking out from your pilot seat, it in theory, should be  an easy game to port. Thankfully it was done as well as you would expect. Being able to visually track targets as you look around your cockpit will have you losing yourself in the game.

With all the colorful and crazy planets full of strange landscapes and creatures, this game was begging for VR. Not only do you get to see these spectacular worlds, but you get motion tracked hands. Unfortunately it does lack room scale locomotion, which can be somewhat disorienting.

This is a pretty simple game, allowing you to play board games and such with physicalized pieces. While not initially released with VR support, it was planned from early on. So while this game is great in VR it doesn’t quite belong on this list.

This is an example VR conversion. After playing in VR I had a hard time imagining playing it on a flat screen. Unfortunately the flat and VR versions of the game are different, so you will have to make sure to buy the version you want.

What did you think about our list? Are there any games you think are missing? Let us know in the comments below.

GAMING, STEAM
Thank you for reading!