On this page
1. The gameplay is intriguing
2. Getting started in BONEWORKS
2.1. Leaving the first room
2.2. There are plenty of interesting puzzles and intense combat
3. Immediate issues, VR sickness
3.1. The gameplay is great, but it has its quirks
4. Final thoughts
5. Our Rating: 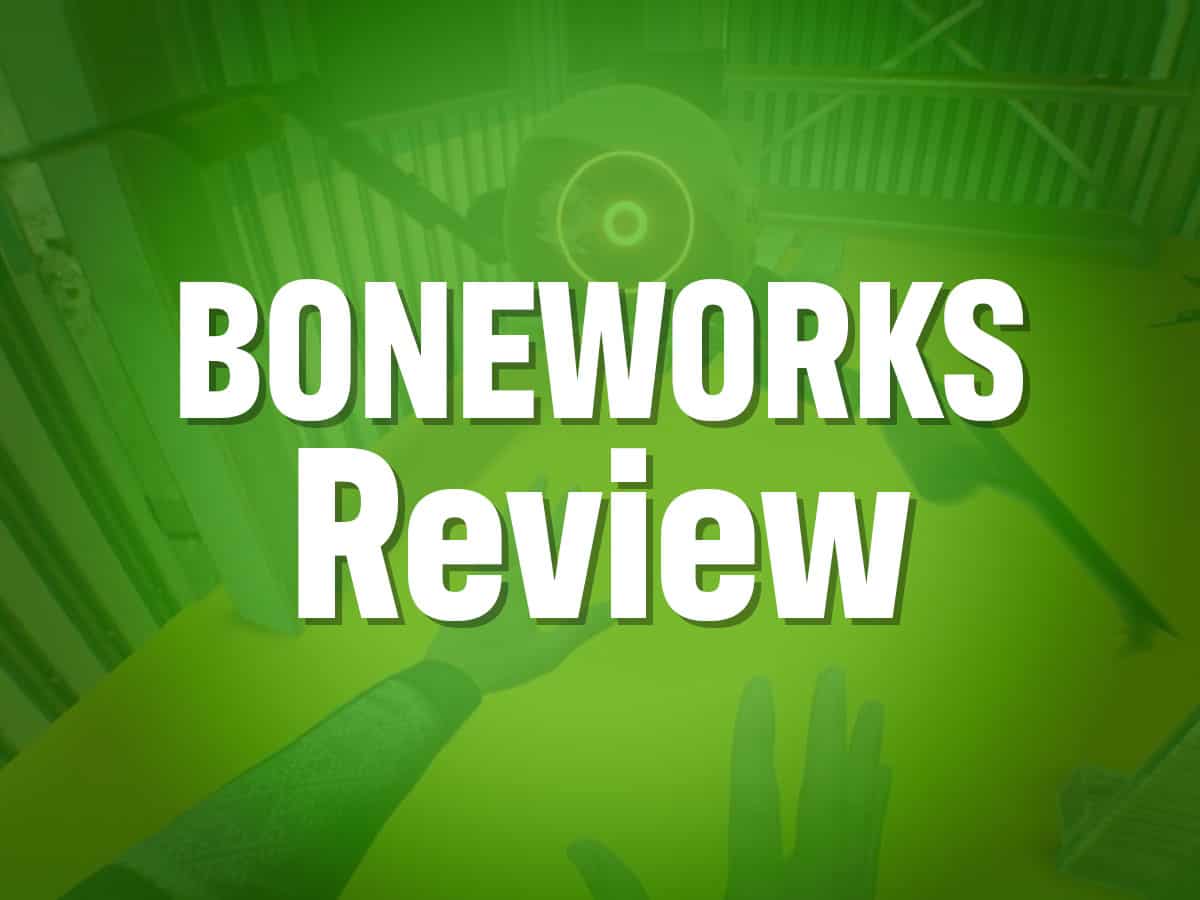 On this page
1. The gameplay is intriguing
2. Getting started in BONEWORKS
2.1. Leaving the first room
2.2. There are plenty of interesting puzzles and intense combat
3. Immediate issues, VR sickness
3.1. The gameplay is great, but it has its quirks
4. Final thoughts
5. Our Rating:

In 1998, a Jurassic Park themed game called "Trespasser" was released, promising physics-based puzzles and action. It was unique in how you interacted with the environment.

You had a mouse-controlled hand that allowed you to touch the environment. As impressive as this was, it was also an awkward mess. It required you to press different mouse buttons and the shift key to rotate and extend your snake-like arm.

Jump to the present and now have "BONEWORKS" that can more than deliver on the gameplay promised 20 years ago.

Why compare this game to one from 20 years ago that isn't even the same theme? Not only does the unique control scheme push the "reality" of objects, similar to Trespasser, but the "story" is also a mystery more than a narrative.

The gameplay is intriguing

There's just enough intrigue to get you to experience the physicality of the world. This could be considered a knock against both games, but it's a selling point.

When changing what gameplay even means, too forceful of a story could get in the way. The game could be a tutorial for both players and developers, preparing them for what will come in the future.

Getting started in BONEWORKS

As BONEWORKS starts, a warning pops up that says locomotion is experimental and could cause sickness. This is a justified warning.

You can choose between both seated and standing gameplay. Both still cause me discomfort over time, but the seated experience seems to affect me a bit more. I also found seated a bit more awkward when presented with situations that need quick action.

After you calibrate the system for your height and play style, you start in what looks like a room the developer would use to test a VR headset.

Leaving that room, you're presented with a menu that lets you start the game, which drops you into something akin to a VR museum. This is a creative way of teaching you how to navigate and interact with the world.

As you progress, you're given a variety of different objects and weapons to play with. The game will then have you solve some basic puzzles with these objects to prove you understand their uses.

The game proper starts after you finish this beginning sequence. It has a very dystopian feel, very reminiscent of Valve's work in "Portal" and "Half-Life." It's mostly undirected gameplay i.e. no mission markers or to-do lists, though you will see some graffiti leading you along.

There are plenty of interesting puzzles and intense combat

You're presented with puzzles that will make you think differently than a flat game would. Many have you pulling yourself and objects along, in ways not possible without motion controllers.

The combat is intense. Weapons are cumbersome to swing, and gun reloads are close to life. This can make you panic when that enemy starts coming at you. In short, it's lots of fun.

Many VR games have minor issues. These minor gripes are the price paid for being on the cutting edge. The more you try to push forward, the more problems you are likely to stir up.

The first issue I have with the game is its long load times. These load times wouldn't be an issue on a flat-screen game but feel like an eternity in a headset.

To help combat this, I started launching the game before I even donned the headset. This helped a little, but you still need to load your save in-game.

That leads nicely to my next issue. To save your progress, you have to reach a designated save point. While save points aren't that far apart, I start experiencing a bit of VR sickness before I get to the next one.

With a game known to cause discomfort, I would have liked a save system that allowed me to quit whenever I felt the need. I can't get to the next save station before VR sickness makes me stop. Because of this, I ended up losing progress in almost every playthrough.

The gameplay is great, but it has its quirks

Climbing generally works well, but it is missing something. Trying to get up onto a ledge is particularly frustrating. While you can grab on to all sorts of handholds, only your hands can be used.

Your feet or elbows can't help you to help get you onto the ledge. The character you are playing isn't particularly strong, so you can't muscle up your way onto the ledge either.

My biggest issue is the VR sickness. I blame it on the freedom of the locomotion. I don't hold it against the game, as it is part of what makes it so interesting. However, it does dampen my enjoyment, so it should be noted.

If you have an iron VR gut and want to experience a fully physicalized world through puzzles and combat, I strongly recommend BONEWORKS.

If you have a bit weaker stomach, I still think this might be worth it, and you will probably be able to work up to playing it longer as you stretch your VR legs.

If you are particularly susceptible to VR sickness, I suggest that you skip this for now. It would be hard to enjoy or even make progress if plagued with VR sickness.

Graphics: - Solid graphics for a VR title, if not necessarily groundbreaking. I enjoy the realistic art style, which helps make the action more intense.

Controls: - Truly pushes what it means to interact with the world. Needing to use two hands to pick up large and heavy objects help make the world feel more substantial. Things can get a bit weird at times, though, particularly when trying to climb.

VR Comfort: - While not the most uncomfortable game I have tried, the only thing stopping me from playing more was my uneasy stomach.

Value: - There is a fair bit of content in story mode, and the enemy wave mode will give you lots to do. It's a joy to play around with physics as well.

Overall: Very Good! - I'm very impressed with this game and would like to rate it even higher if it weren't for the harshness on my gut. If you don't suffer from VR sickness, this is an excellent game. If you are prone to nausea, it's still a lot of fun, but be aware you may have to pay the price to play.

Get It On Steam