On this page
1. How well can those little lines work?
1.1. How well are they made?
1.2. Here's the rundown my setup.
1.3. Was it worth it?
1.4. Sounds great, what's the catch?
2. Final thoughts, should you get overhead cable management?
3. Update, Quick Disconnect Hack 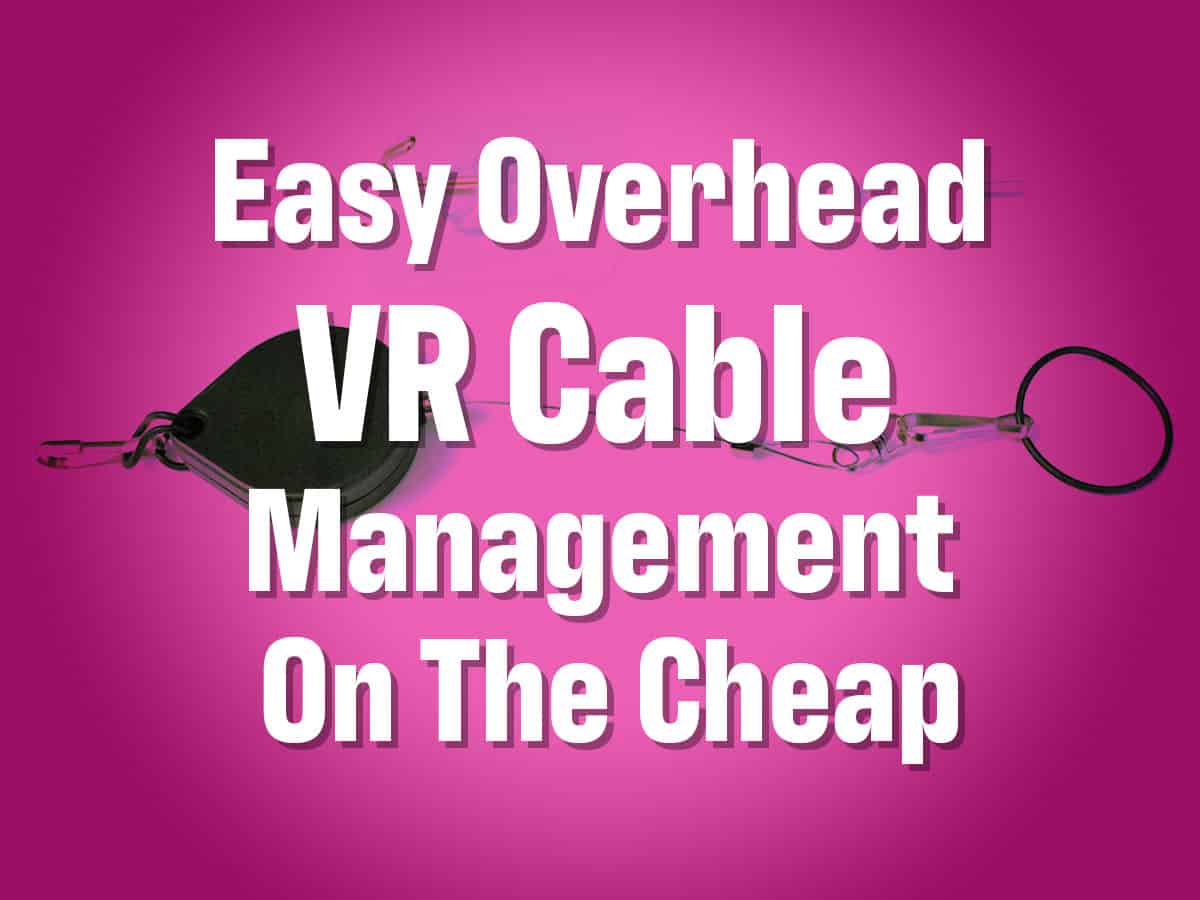 On this page
1. How well can those little lines work?
1.1. How well are they made?
1.2. Here's the rundown my setup.
1.3. Was it worth it?
1.4. Sounds great, what's the catch?
2. Final thoughts, should you get overhead cable management?
3. Update, Quick Disconnect Hack

As I tripped over my cable again while trying to expert a level in Beat Saber, I dreamed of a wireless system for my CV1.

Unfortunately, while there was a wireless adapter for the Rift, made by TPCast, it was prone to many issues and was fairly expensive. This led them to take it out of production. So while wireless is out of my reach, for now, I found an alternative system using retractable lines hung from the ceiling.

How well can those little lines work?

The important part is how they work. The first thing to note is that this setup will result in, at minimum permanent adhesive hooks hanging from your ceiling, and at most a web of cables and retracting pulleys or "retractors" draped from the attached hooks adding to the decor.

The kit I picked up comes with six of the following; retractors, adhesive pads with attached hooks, and small screw hooks with wall-anchors. Along with these, a bag of a dozen O-ring style rubber bands and an Allen wrench is included.

The Allen wrench is used to control the amount of slack each retractor has with the use of a set-screw stopper on the cable. This is important because unless you have an extremely tall ceiling you want these to be as high as you can get them.

How well are they made?

Build quality of the retractors in this particular kit are great, much sturdier than what you might get at a workplace or convention.

The cable in the retractors is rubber-coated metal, with a swivel on the end that had a simple one-piece quick release hook clipped onto a rubber-band. On the other end of the retractor, another rubber band is attached to a hook that will be used to hang from the ceiling.

Here's the rundown my setup.

For my particular set up, I used 3 of the adhesive pads to hang the retractors, about 2 to 3 feet apart. With the final retractor towards the back of my room. I tried using a hook in the middle, but the cable seemed to tangle up my arms as I flailed about trying to cut blocks, so I added a hook to the back of the room.

Similar to the setup ThirllSeeker used (he's since taken down the video), I zip-tied the cable to the back of the headset. The zip-ties gave it further strain relief and so that the cable came off the back of the Rift. My setup required me to extend my cables about 20 feet, but I suspect many users may be able to get away with not extending them at all, depending on the location of your computer.

Was it worth it?

I suspected it was going to be nice to not have to trip over my cable, but I didn’t realize how freeing it was to feel cable-free.

Suddenly I was more immersed,  not having to shuffle my feet around the cable, it was pretty amazing. It even improved my Beat Saber’ing, letting me complete songs on expert that I hadn’t been able to finish before.

So, yes, it was worth it. For a relatively cheap addition to your VR room, I don’t think you can go wrong.

The main issue you may run into is that it can turn your room into an unsightly web of cables. So if you play in a living room or other room that shares function with something other than VR you will have to plan to take the retractors down between sessions. On top of that, if you play 360-degree games it is possible to get your cable tangled up.

Centering your hook in your play-space can help, but ultimately you will have to deal with it at some point. Using software such as Cable Guardian, that aims to help keep you from spinning too many times in one direction, will help you deal with this, but does detract from immersion a bit.

There are a few specific weaknesses of this kit. Most notable is the distance it hangs off the ceiling. My ceiling is about 7.5’ tall, so any amount hanging down can potentially get snagged.

Another issue is that the retractors are not quiet. It’s not like I can hear them over a Beat Saber track, but in quieter games it is audible. You may also find not every retractor pulls with the same strength or smoothness. I recommend testing them all and putting the smoothest ones closer to where your head is attached.

Last, and also least important, the swivels it comes with are great at keeping the cable and retractor from twisting, but they are a bit notchy. This results in sudden untwisting that can be felt through the cable.

It is also worth noting you will feel the cable pull on the headset as you get further from your final retractor. Though it isn’t exactly desirable, it can be used to help tell you when you are getting too far away. With that said, the maximum cable length is 61’ so it does give a great deal of mobility, with even just one retractor.

Final thoughts, should you get overhead cable management?

Ultimately, this just sells me on how critical wireless will be to VR being more mainstream. For those of us with headsets that don’t have that option, I think overhead cable management is the way to go. This set will get you started for less than 10% of what the wireless offering cost, even when it was available.

If you don’t mind spending a little more time and money to make taking the cables down between play sessions I have an additional recommendation.

For a little less than the cost of the retractors themselves, you can get 5 magnet hooks that, with a little ingenuity, can be attached between a VR USB extension cable and retractor, acting as a quick disconnect.

The way I accomplished this did require drilling the top hole out in order to fit the rubber band through it, but you could probably manage with just the key-ring that comes with them. There are kits that are single color, but I find having different colors for each position makes putting the cable back up a breeze.

This does cause the system to hang a bit lower, but I think the result is worth it. The strength of the magnets far outpaces the retractor’s, so there is no risk of them coming decoupled unintentionally.