On this page
1. Microsoft’s Combat Goggles $22 billion deal
2. Benefits of Integrated Visual Augmentation System (IVAS) to the US Army
3. Issues Faced by the US Army in Adopting Microsoft’s Combat AR Glasses (150)
4. The US army is still committed to integrating this first-of-its-kind technology. 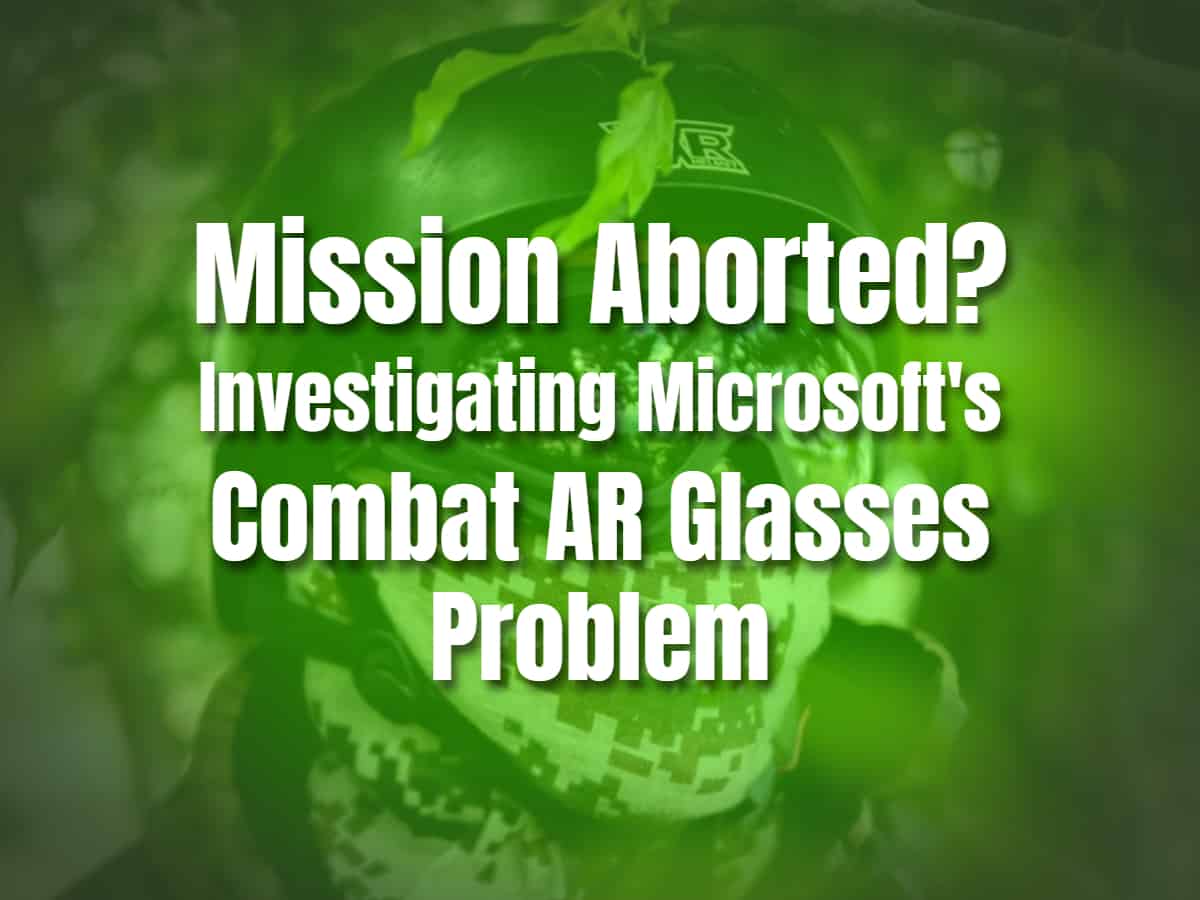 On this page
1. Microsoft’s Combat Goggles $22 billion deal
2. Benefits of Integrated Visual Augmentation System (IVAS) to the US Army
3. Issues Faced by the US Army in Adopting Microsoft’s Combat AR Glasses (150)
4. The US army is still committed to integrating this first-of-its-kind technology.

Microsoft won the bid to develop a pair of augmented reality (AR) glasses for the US military in 2018, and the company has since been hard at work on its Combat AR glasses. The project was seen as a major step forward for Microsoft, as it would be their first foray into the world of military-grade AR technology. However, recent reports suggest that the project may be in trouble, with some sources claiming that Microsoft is considering abandoning it altogether. While Microsoft has yet to comment on these reports, it appears that their ambitious plans for Combat AR glasses may have hit a roadblock.

In 2018, the U.S. army awarded Microsoft $480 million from the US military to advance their Augmented Reality program known as the Integrated Visual Augmentation System (IVAS). This investment helped create prototypes such as Combat AR Goggles.

In 2021, the military deal was followed up with an even larger commitment of $22 billion for Microsoft to build and perfect their HoloLens-like smart goggles for soldiers on the frontline.

However, since then, they have faced delays and many performance issues. This even resulted in IVAS failing four of six elements in a test conducted by the U.S. Army earlier. Business Insider reported fatal flaws such as its display being visible from hundreds of meters away, limited field of view and peripheral vision due to its size and weight, etc., were all factors that put US soldiers at risk if they used it in combat situations.

Despite these roadblocks, the U.S Army remains committed to acquiring these IVAS headsets; In fact, an Army spokesperson assured that they had used this evaluation as an opportunity to identify and address any areas where IVAS needed improvement according to the Assistant Secretary of Defense and Acquisition Brigadier General Christopher D Schneider's statement to Business Insider news outlet.

Benefits of Integrated Visual Augmentation System (IVAS) to the US Army

The Integrated Visual Augmentation System known as the IVAS system is a mixed reality system developed by Microsoft for the US military. It combines artificial intelligence and augmented reality to provide soldiers with enhanced situational awareness in combat situations. IVAS is designed to be worn as a headset, allowing soldiers to see their environment in real-time while also receiving information from other sources such as drones or satellites. The system can also detect threats and obstacles, providing soldiers with an extra layer of protection.

The Integrated Visual Augmentation System (IVAS) headset developed by Microsoft offers the US Army a multitude of advantages on the battlefield. This revolutionary headset is designed to provide soldiers with an in-depth view of their environment, which enhances the accuracy of their decision-making. It also allows them to receive instructions and communicate with other teams quickly and efficiently.

Further, it features a heads-up display (HUD), similar to those found in video games like Battlefield and Call of Duty. With this HUD, soldiers can see maps, as well as locate enemy combatants and objectives with ease. Additionally, they have access to high-resolution night vision and thermal imaging capabilities that help uncover details that would otherwise be blocked off from sight.

This AR-enabled IVAS technology even comes with facial recognition software that gives soldiers the ability to identify friends or foes in seconds, as well as language translation abilities so they can understand what others are saying clearly. On top of these great features, it even has an anti-fog coating that maintains clarity despite harsh weather conditions such as 95 degrees Fahrenheit and 100% humidity!

The US Army has faced issues when considering the adoption of Microsoft's Combat AR Glasses. Last year, the Army conducted testing to assess the IVAS device with a group of 70 Army infantry soldiers, who were tasked with using the device during three 72-hour combat scenarios. Unfortunately, these assessments weren't successful and revealed "mission-affecting physical impairments" including headaches, eyestrain, and nausea occurring after only a few hours.

As a result of this feedback, Congress rejected the Army's request for $400 million to purchase 6,900 more of these AR combat goggles this year. This highlights that there have been challenges in adopting Microsoft's latest technology for use in military operations.

It's clear from these tests that more work needs to be done before the US Army can safely adopt Microsoft's Combat AR Glasses - and this highlights the importance of thorough pre-deployment testing before any new technology is adopted.

The US army is still committed to integrating this first-of-its-kind technology.

The US Army is still full-steam ahead in its collaboration with Microsoft to integrate the revolutionary and first-of-its-kind Combat AR Glasses technology. Despite earlier miscalculations that caused a backlog of the IVAS headsets, ranking officials have made clear that they are committed to including this groundbreaking tech in their army uniforms.

Additionally, the Army was recently awarded a $125 million “task order” for the development of version 1.2 of this first-of-its-kind technology, which is said to include software improvements for increased reliability and reduced power demand. With its 5,000 pairs ready for training, this revolutionary augmented reality headset could reach up to 21k devices in number once the new modifications result in success.

Furthermore, lawmakers have earmarked $40 million for the development of a newer model—version 1.2—of the IVAS headset, which will include software improvements for increased reliability and reduced power usage. These updated goggles will also have a lower profile Heads-Up Display with distributed counterweight for improved user interface and comfort.

To date, only 5000 goggles have been issued to personnel for training purposes — just a small fraction of the full deal maximum of 121,000 devices and associated spares and support services outlined in the $22 billion agreement with Microsoft. The aim is to introduce the full package complete with version 1.2 tech later, solidifying their commitment to taking advantage of pioneering technology for their modern army force needs. The final test will decide the history of revolutionized warfare.

AUGMENTED REALITY
Thank you for reading!