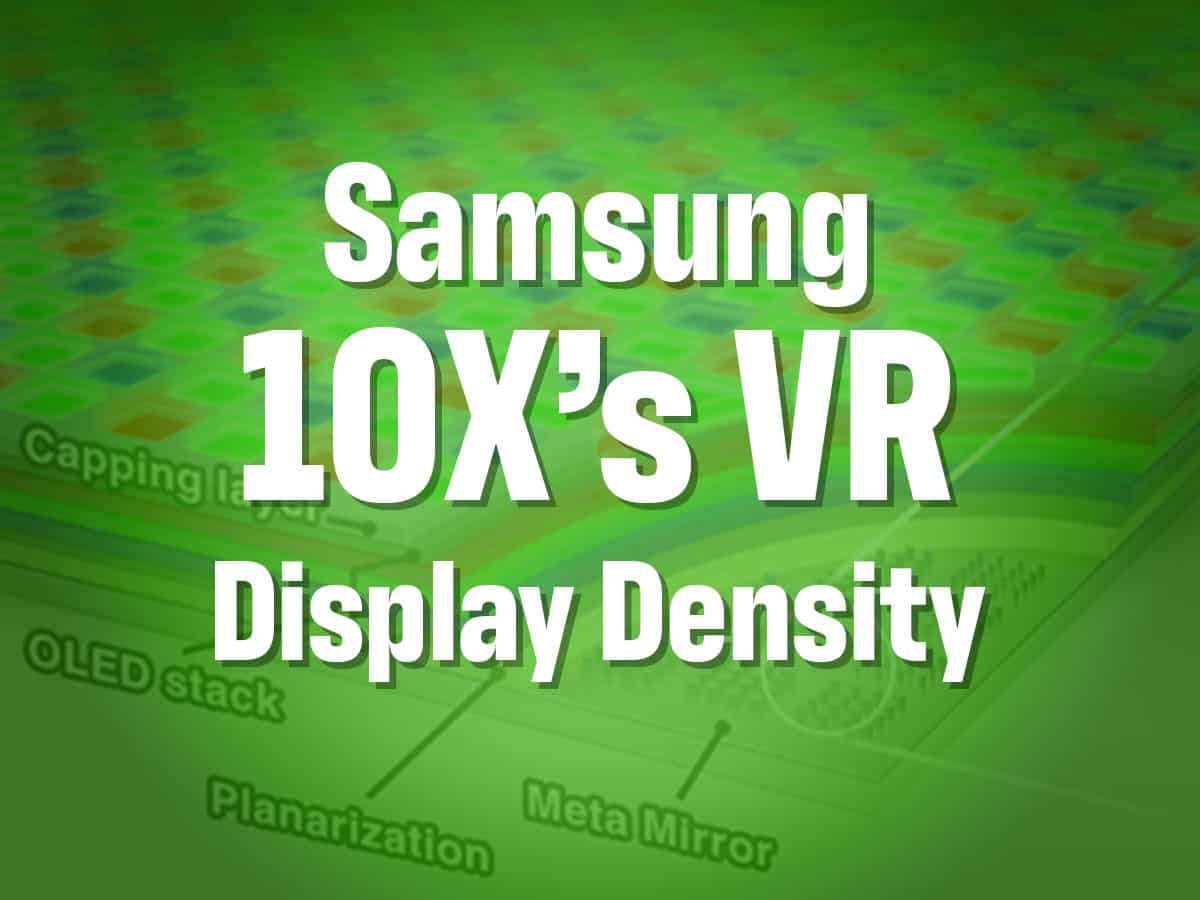 Samsung is looking to turn a proof-of-concept pixel technology, capable of hitting 10,000 pixels per inch, into screen-door free displays for virtual reality.

The source of the tech

An engineering paper from Stanford showed that a 10,000 PPI OLED display was possible. It is using white OLED emitters and nanopatterned metasurface mirrors to extract the color. This allows for twice the luminescence efficiency of standard white OLEDs. It's also potentially more cost-effective to produce.

There are a couple of techniques to use OLEDs (Organic Light Emitting Diodes) in displays. One has each subpixel producing the color itself, while the other uses white OLEDs that have a color filter used to change the color. The paper says they achieved 10k PPI and the tech can theoretically achieve up to 20k PPI. Though at these higher densities, brightness may suffer.

This new tech uses white OLEDs but utilizes nano-patterned metasurface mirrors to control the color of the light. These metasurfaces are described as mirrored nano-corrugations. They are used to extract the desired color from the white OLEDs. This new technique not only lets them pack in more pixels per inch, but it also allows for brighter color than the traditional filtered OLED panels.

What this could mean for VR

Samsung is planning to scale up this technique to full-sized displays. So at some point, we could start seeing these in VR headsets. This is an order of magnitude higher PPI than the current highest resolution mainstream headset, the HP G2, that has 1058ppi.

For reference, the Oculus Rift CV1 used a Samsung panel with an approximately 460 PPI and two 2.5” square screens. Each screen had a total resolution of 1080x1200. Equivalent resolution with a screen with 10K PPI would be roughly 23,500 x 26,100, which would be over 613 megapixels per screen.

It's great to see Stanford and Samsung pushing the limits of how many pixels they can fit into a screen. However, this is a pretty extreme resolution for VR. In fact, there are many other tech hurdles that would need to be overcome before something like this could be used. Just the amount of bandwidth it would take to send so much data is a significant issue.

That said, this technique may have other benefits. They imply it offers more luminance for the power. They were also proud of their color purity in comparison to micro-LEDs. So even if we don't need the crazy resolution these screens could supply, we could still see some impressive improvements in the future.