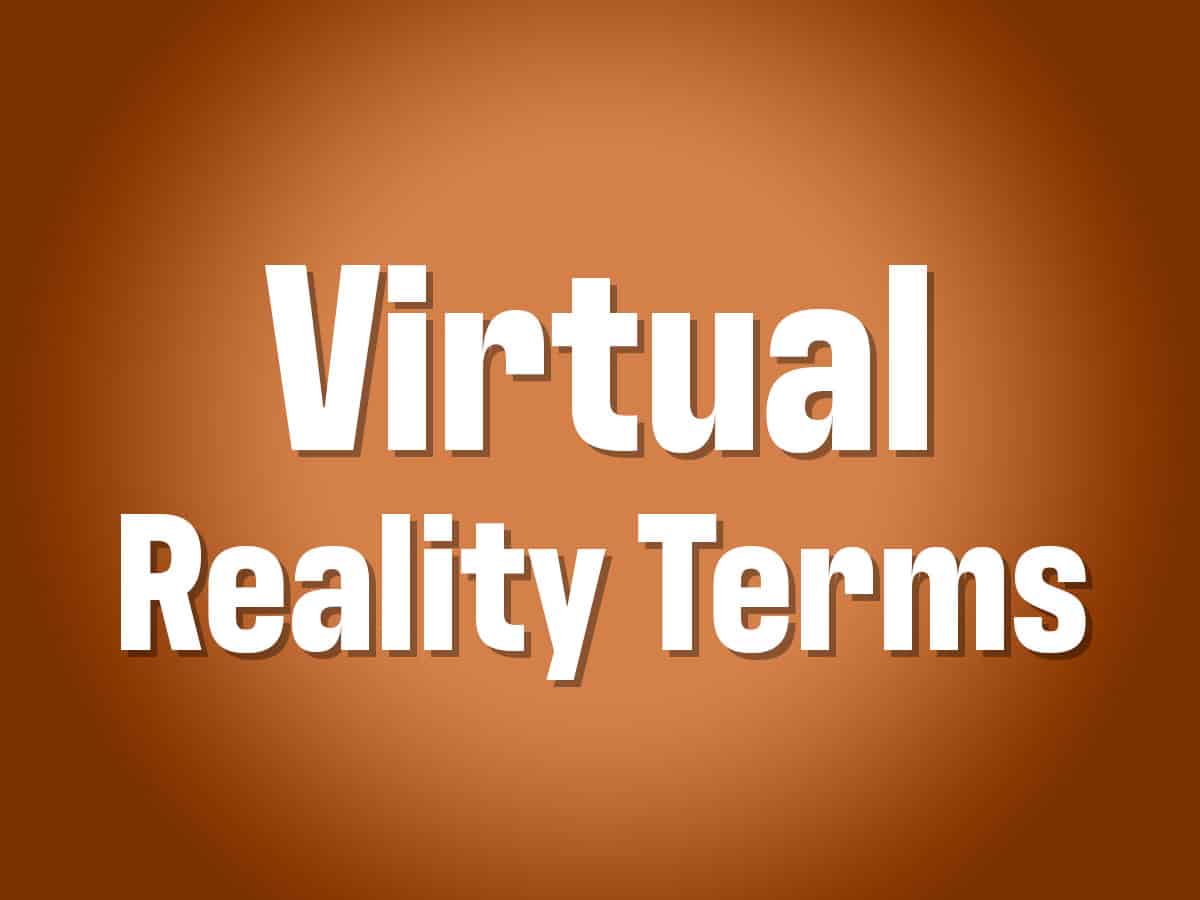 What is VR (Virtual Reality)?

Experiencing an environment, either real or rendered, often through an HMD that give you stereoscopic depth and positional tracking that combine to trick your brain to make you believe you are in a different location.

What is AR (Augmented Reality)?

An overlay onto a display that you view the real world through. Sometimes used to add information to the real world such as directions on your phone, as you hold it up to the world.

What is VR Sickness?

Similar to motion sickness, it is a disagreement between what your inner ear and vision are telling your brain, while in a VR experience. This information disparity causes a variety of discomforts, such as dizziness and nausea, that can last for hours after leaving a VR session. The experiences that cause VR sickness the most have your virtual presence moving while your real body is stationary. Most say that with continued exposure your tolerance against VR sickness increases.

What is an HMD (Head Mounted Display)?

A device that gives you an independent view for each eye, usually through a lens onto a screen, that produces a stereoscopic view of the image being presented. The device is also able to track its position in space, which allows parallax to add to the sense of depth.

What is Foveated Rendering?

The process of rendering only the small part of the screen where the center of your vision is looking at full quality. To fully utilized this tech, eye tracking is required.

What is Stereoscopic 3D?

The process of rendering views for each eye that are slightly offset from each other, to simulate the different views your eyes see in the real world due to your IPD. This offset in real life is part of what gives you depth perception.

The way close objects, in our vision, appear to move more than distant objects. This effect aids us in perceiving depth.

What is Chromatic Aberration?

If a lens fails to focus all colors of light to the same point you will end up with a blurry image often with color fringing on the edges.

What is IPD (interpupillary distance)?

The physical distance between the pupils of your eyes usually measured in millimeters. It can be measured by using a ruler on a mirror.

What is Eye Tracking?

This is the ability of the device to know where your gaze is located. Many use high-speed cameras and machine learning to determine this.

What is Inside-out Tracking?

The HMD uses cameras on the device to analyze the surrounding area, and is able to determine its location in space without the use of external devices. This can also be used to track other devices like motion controllers. Limitations include needing a well-lit room, with no reflective objects like windows and mirrors. Object occlusion can occur depending on the location of cameras on HMD.

What is Outside-in Tracking?

The HMD and motion controllers use external devices for tracking. They need to be mounted in a way to cover the play area, and prevent occlusion of headset or controllers by the player or other objects. Requires multiple external “sensors” to achieve 360 degrees of tracking.

What is 3DoF (Three Degrees of Freedom)?

What is 6DoF (Six Degrees of Freedom)?

What is Room Scale?

Tracking system that allows for tracking as you walk around your play-space as opposed to being locked in a stationary standing position.

What are Motion Controllers?

Separate controllers for each hand that track 6DoF movement, usually representing your hands in space. Often buttons are used to help navigate or interact with the world.

What is Hand Tracking?

Sensors are used to track hands without the need for controllers. Gestures may be used in place of buttons.

What is the Rift CV1?

The first consumer full production headset put out by Oculus Used outside-in tracking. With two OLED screens running ar 1080x1200 at 90Hz giving the wearer an approximately 110-degree FOV.  Also included were built-in removable headphones. It was originally released as a standalone headset with one tracking sensor along with an Xbox One controller and a remote in 2016. Subsequent releases had it bundled with the Touch controllers. Superseded by the Rift S.

What is the Playstation Move Motion Controller (First Gen, Oct, 2016)?

Motion controllers used with the PS3 and PS4 that in conjunction with the PlayStation Eye camera track hand position. These are the least accurate motion tracking controllers but are also the most affordable. They have 4+1 face buttons and an analog trigger button.

These are tracked by the lighthouse outside-in tracking system. They have positional finger tracking and a strap that allows you to fully open your hand without dropping the controller. This allows for throwing and dropping of items in a more natural way.They have 2+1 face buttons, and a joystick+button, a touchpad, and a trigger+button.

What is the Valve Index Base Station ( Light House )?

Originally used for the Vive, but several other headsets have adopted them. Currently, they are accepted as the most accurate tracking system, and also offer the ability to have full-body tracking. It uses lasers to scan the room, while the sensors in the headset locate their position, relative to the base stations. Usually, two base stations are used in opposite corners of the play-space. These base stations only need power (rather than data connections), making them an easier setup than the system the Oculus Rift CV1 uses.

What are the Oculus Touch Controllers?

The first specific built motion controllers, The originals are tracked with Oculus’s IR cameras, while the new ones are tracked from cameras in the headsets themselves. They have 2+1 face buttons, a joystick+click, an analog trigger, an analog grip button, and capacitive sensors built into the buttons to give basic finger positional data.

GUIDES
Thank you for reading!