On this page
1. Crazy levels of detail
2. The feel of every switch
3. It's complex, but the tutorials help
4. It has the sim part down, but is it fun
5. Missions are fine, career mode is lackluster
6. Final thoughts
7. Our Rating: 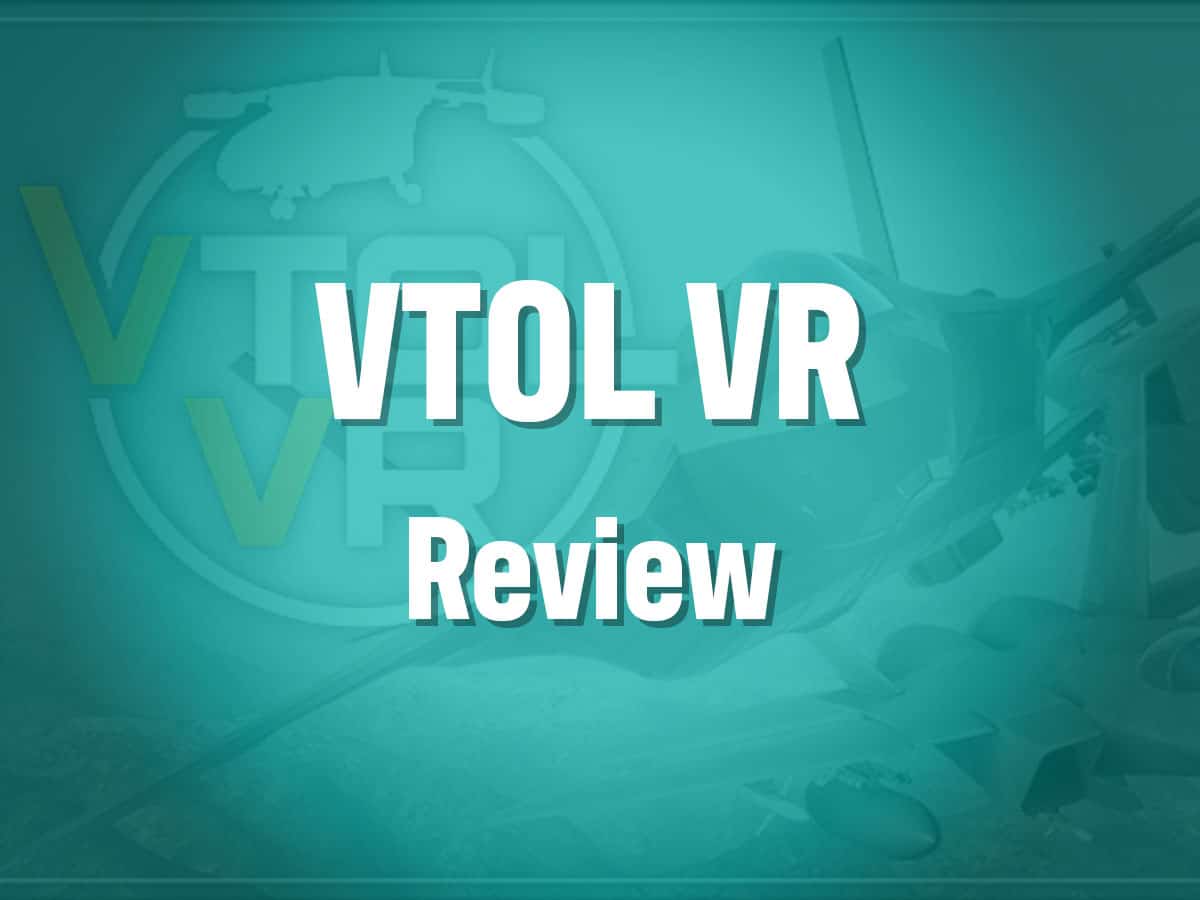 On this page
1. Crazy levels of detail
2. The feel of every switch
3. It's complex, but the tutorials help
4. It has the sim part down, but is it fun
5. Missions are fine, career mode is lackluster
6. Final thoughts
7. Our Rating:
VTOL VR is what I imagine a late 90’s flight game brought into VR would look like.

It brought back memories of “F22 Lightning II” in more than a few ways. With simple mission briefings and very simplistic graphics. I had thought it might be nostalgia clouding my memory.

After watching some video I would say “F22 Lightning II”, a game from 1996 mind you,  has similar quality terrain texture. This may sound pretty disappointing for a game that came out well over 20 years later, but there is much more to this game than its graphics.

First thing to note is the cockpit. There are loads of dials and switches which you will use the motion controls to interact with.

For control of the craft, you just grip onto the virtual throttle and control stick with your tracked hands. There's also an option to add physical pedals for yaw control (otherwise this is handled by stick-twist).

I had my reservations of trying to fly without a real stick, however, I’m impressed with what they’ve done. Don’t get me wrong, this system won’t be replacing anyone’s real HOTAS, but I was easily able to accomplish all the basic maneuvers.

Being a game about VTOLs, you do find yourself hovering quite a bit, and the controls are capable enough to accomplish the finer control needed for this. Though you do lose some feel with the motion controllers, I think what you gain from them is worth the trade-off in this particular game.

The feel of every switch

The reason you’ll want to play this game is for the feeling it gives of being a real fighter pilot. Perhaps the controls and startup are not 100% true to real jets, but that doesn't matter.

As I turn on the battery, run my APU to start my engines, then shut it back off, all using my VR hands, it does a good job at convincing me I’m a pilot. The interaction with dials and switches just feels nice.

If you point your finger at a switch you get a tooltip, and if you press the trigger on the controller your hand grasps the switch, allowing you to flip it. This combined with some good haptic vibration feedback quickly has you forgetting you aren’t really toggling a switch or twisting a dial.

It's complex, but the tutorials help

No need to worry if you don’t know how to start an aircraft. The tutorials do a great job of walking you through how to use all the important bits. Even as a novice sim’er, I learned quite a bit about how the different gauges and displays work.

The tutorial focuses mostly on the controls of the Kestrel AV-42C, which has no real-life analog but reminds me a bit of the Pelican from Halo.

Unfortunately, since the tutorial focuses on the Kestrel it doesn’t cover much about the other craft. Launching from an aircraft carrier or the finer details of VTOL flight in the F-45A were tough to pick up. I’ve crashed attempting to take-off a dozen times now. I would have also liked more instruction on how all the munitions work.

It has the sim part down, but is it fun

As far as the gameplay goes, I had a particularly fun moment in the tutorial where I was tasked with shooting down enemy craft with missiles. I successfully shot down all but 2 of the craft and realized I had shot my last missile.

I switched to my canon and put another down. I shot two short bursts at the last jet and watched as two bursts of smoke exploded out of him. I lined up for the kill only to find out that I had run out of cannon ammo as well.

Without any armaments, I wanted to see if the damage I had done to him was visible. After a brief chase, I managed to get close enough to see he was emitting smoke. My targeting computer kept trying to target the smoke,  which could be a glitch or a feature.

So, I did what any good computer game pilot does, I attempted to Joust him. On contact, I did get the mission-success chime, but unfortunately at the same time, I was informed my pilot died of G-forces.

The missions are what I would expect out of a flight sim. Generally made up of one or more of the following’ fly to waypoints, shoot some ground targets, pick up some troops, fly back to base, and or fight some air targets.

Some of the missions have a bit of backstory, but every mission is a self-contained operation, with no overarching story or plot. Personally I would have liked a bit more cohesiveness in the career mode to help give me a sense of connection to the world and events.

Let's talk about the elephant in the room. Microsoft Flight Sim is out now, it's beautiful, and they promise VR support in the future.

In a graphical comparison, you’d see no reason to pick up this game. However, unless Microsoft surprises me, I don’t think you’ll have near as amazing tactile experience with MS Flight Sim as you will with VTOL VR. This game just feels so good twisting those knobs and throwing those switches.

Aside from the graphics, another complaint I have would be content. Even if they just built a tutorial mission for every aspect of the different aircraft, I think that would go a long way.

It is early still, and the included mission editor is pretty nice and opens up in-game. This gives me hope that user-created content could really pick up the slack.

Graphics: - The cockpit’s graphics are stylized and look pretty good, but the landscapes and character models are lacking.

Sound: - Sound design is pretty good, with cues like wind noise and engine sounds pulling you in. Tutorial voice over is basic but serviceable.

Controls: - This is the reason you pick up this game. A cockpit with buttons and switches that are fully motion controller interactable.

VR Comfort: - Only occasional discomfort. This should be a safe game for all but the most prone to VR sickness.

Value: - A great initial experience with excellent VR controls. The ease of accessing user-generated content is great. The graphics are dated, however, and missions are basic.

Overall: Very Good! - If you are interested in VR flight combat, it doesn’t get much more interactive than this. VTOL VR has plenty to offer a sim enthusiast.

Get VTOL VR On Steam

GAMING, STEAM
Thank you for reading!