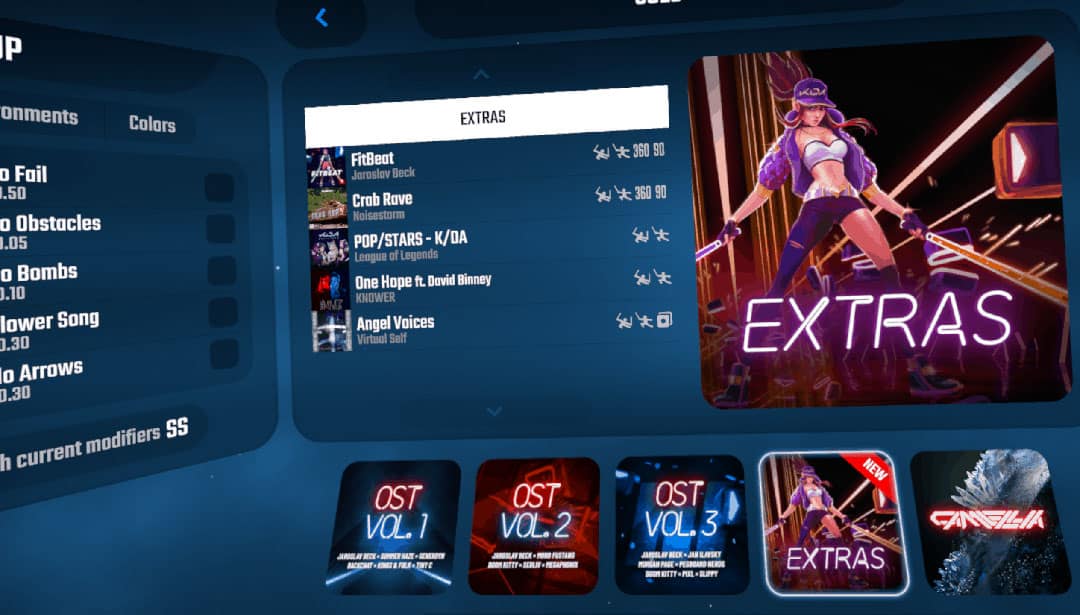 Beat Saber: Is it worth playing two years later?

I’ve never been much into rhythm games, so while Beat Saber had been sitting at the top of the charts, I hadn’t given it too much thought.

However, with the lockdown going on due to the Covid19 pandemic, I decided I needed something to get me moving. There were a couple of other popular VR games I had considered, but ultimately I picked up Beat Saber with a nice discount through Humble Bundle’s Choice program.

Is the Beat Saber hype real, or just hype?

It’s not often that a game with rave reviews impresses me. Living up to such expectations can be difficult. Beat Saber not only lived up to the hype but really blew me away.

Have you ever had a scene in a movie give you a chill of excitement? The first song I played gave me just such a chill. It was pretty amazing. As I played through a few more songs, that chill wore off but I still felt as if I was in a flow state.

I have the need for speed

The faster the song, the more I lost myself. I have to mention that I played the majority of my time in “no-fail” mode. I really think this is the best way to start, so you can just get the experience.

After working my way through the 32 included songs, I can say this will definitely be a great addition to my daily routine. For reference, I’m not crazy into fitness or anything, but I regularly do simple workouts like pull-ups and pushups. With that said, after playing just a couple hours,  I could feel my arms getting sore.

I also found myself wishing for the VRcovers I had ordered for my Rift because I was drenched in sweat, causing the stock foam padding to get a little moist.

It's a great workout, so how is Beat Saber's gameplay?

At this point, I haven’t said much about the gameplay, since this game has been reviewed so heavily by other sources already.

For those who may have missed all the coverage of Beat Saber, simply put, is like a combination of Dance Dance Revolution and Fruit Ninja. At the most basic level, you wield what is essentially a lightsaber in each hand, red in your left hand, blue in your right (different levels change this).

You stand in a designated area, while cubes that match the color of one of your sabers fly toward you. Your job is to cut the cube with the matching color saber, in the direction of an arrow printed on the cube. There are a plethora of options to make the game both easier and harder, such as song speed, non-directional cuts, and my least favorite, disappearing arrows.

Songs have up to five difficulty modes on top of the aforementioned difficulty modifiers, making the game very accessible while ensuring there is always a challenge if you are looking for one.

The music makes this even more special

This is all done to the beat of the song you pick. There is a pretty decent variety of tracks, but they are all what I would call techno. I think this might be the biggest weak point of the game.

Thankfully, while I love most of the music, if it’s not to your taste, you may still be in luck. There is a pretty robust modding community with a large variety of songs available.

On top of that, UploadVR just covered a website that uses AI to convert songs right from YouTube into a Beat Saber track. I gave it a try with a couple of songs, and aside from some weird empty spots, they worked really well.

Keep in mind this works with a Steam install of the game, if you are playing on the Quest there are limitations being put on song imports if played from the Oculus Store, and if you play on PSVR you are stuck with whatever music they offer for DLC. So make sure you listen to some stock playthroughs first, to see if it’s to your taste.

With all of that said, if you like the music and you have the room for swinging your arms around wildly, I can wholeheartedly recommend this game, as not only a fun way to pass the time in this lockdown, but also a great way to add some physical activity to your day.

Graphics: - Minimalist, but suits the needs. I appreciate the look of how the blocks get cut.

Sound: - Music sounds amazing through the Rift’s headphones. Limited amount of tracks could be an issue for those not into the specific music genre offered.

Controls: - Felt perfect with the touch controllers. The rumble as the sabers collide with themselves and walls is very satisfying.

VR Comfort: - No sickness, as all movement is based on you physically moving through space.

Overall: Excellent! - It does everything it claims and lives up to the hype others have given it.

Get Beat Saber On Steam